Raid Boss is a 1-4 player tabletop cooperative board game battle puzzle designed like a strategy RPG. So it keeps all of the cooperative teamwork, combos, and collaboration, but has none of the endless grinding!

Raid Boss is set in the world of Incarnate, where Tyr rules as its brutal Creator. An unknown force, outside of Tyr’s control, has opened a gate from the void itself. It has corrupted this universe and so peaked the interest of Tyr’s brothers and sisters. You are Incarnates, Heroes who have passed through that gate and returned from the void. Now you must band together to survive in this unforgiving world.

You and your team are battling a Boss who the game controls through their Boss Deck. You control a Hero with a mechanically distinct and heavily themed set of abilities. On your turn, you flip over a Boss Card to reveal the Boss’s attack, and roll dice to use your Heroes unique abilities. The abilities you choose on your turn can be used to defend your allies or to defeat your enemy.

You also have a powerful Instant that can be used at any time but only once per round. Because of it’s limited use and huge impact, it’s really important for you to choose just the right time to step in and help.

So gather your team to face off against stalwart, quirky, and skill-testing Bosses that come equipped with their own special deck of cards

There are 12 playable Heroes and 6 Bosses to challenge, each lavishly illustrated, giving you a wealth of content and variety of challenges.

Raid Boss is a Tabletop RPG puzzle with flexibility, so it allows you to devise incredibly clever skill sequences. Because of this, those game-ending threats soon become trivial as you experiment and gain experience. Soon you’ll be taking on even more devious and puzzle-like advanced battles like a Boss. 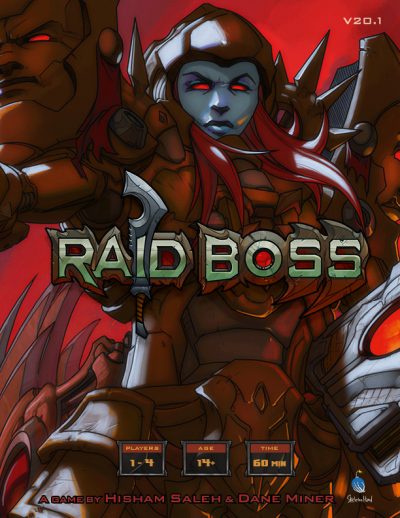 Download the current Rulebook, but check the FAQ for updated info on rulings!